10 meter air rifle is an International Shooting Sports Federation (ISSF) accredited shooting event which is shot over a distance of 10 meters (10.9 yd) from a standing position with a 4.5 mm (0.177 in) calibre air rifle with a maximum weight of 5.5 kg (12.1 lbs). The use of specialised clothing is allowed to improve the stability of the shooting position. It is one of the ISSF governed shooting events included in the Olympic games.

The course of fire is 60 shots within 105 minutes for men, and 40 shots within 75 minutes for women. During this phase a maximum of 10 points are awarded for each shot. The top eight shooters follow this with a final 10 shots – each scored to a maximum of 10.9 – with the cumulative score determining the winner. The maximum of 10.9 is derived from an additional set of 10 rings within the center 10 point circle, increasing in 0.1 point value as the rings approach the center.

Shots are fired from the standing position only, as opposed to some other airgun shooting disciplines such as for three positions (3P) or bench rest.

The major competitions are the Olympic Games every four years and the ISSF World Shooting Championships every four years. In addition, the event is included in the ISSF World Cup and in continental championships, as well as in many other international and national competitions. It is an indoor sport, and at the highest level electronic targets are used instead of the traditional paper targets.

Scores in 10 metre air rifle have improved rapidly during the last few decades and today top competitors sometimes achieve maximum results ("full marks") for the initial phase (600 for men and 400 for women). The majority of these full marks were achieved at non directly ISSF supervised international and national-level matches and championships, where official ISSF recognized world records can not be set. This leads to many national records in fact being equal to the world records. 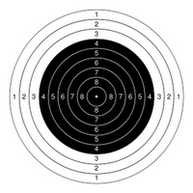 To score a *10* you need to hit that tiny white dot in the very centre! 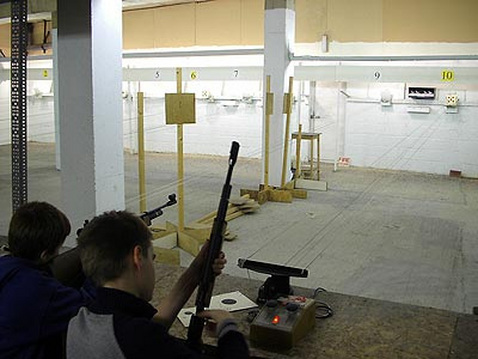 We have a 10-point 10m range with electronic target pulleys.